In addition to gaining news photography and broadcast writing experience at WXOW, I also learned the principles of shaping that content for the web. Here are three stories I produced over the summer of 2012. 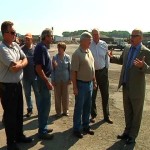 Funds from the bill will help to repair the Highway 43 bridge between Minnesota and Wisconsin, which area businesses rely on to transport goods from state to state.

Congressman Walz says it’s a vital artery of transportation in the area.

“For us to be competitive in the world, we need to have a world class transportation system, and that means roads, bridges, locks and dams, airports, rail, all of it, multi-modal,” he said. “And this is a good start and I’m just proud this community understands this as well as anybody, and they built a coalition that our goal is hopefully we’re going to get a 21st century bridge across the river.”

The Minnesota Department of Transportation says the bridge project is likely to cost between $150-175 million from state and federal funds.

In 2008, the bridge closed for ten days when authorities deemed it unsafe because of rusty gusset plates.

During that period, local manufacturers and retailers reported a loss of over $2 million. Hundreds of workers cross the bridge in both directions each day.

“Their fear is if we shut this thing down, we shut down commerce, we shut down business at a time of recession when some of them are starting to bounce back. It would be devastating,” Walz said. “So we made that clear in the planning process that we have to take that into consideration because at the end of the day, if we do this right, the tax dollars that go into building this bridge will be paid back by the added commerce.”

The Winona Area Chamber of Commerce says they’re hoping that a plan to rehabilitate the bridge will provide certainty to businesses.

“Businesses are very anxious just to have an answer. Businesses don’t like uncertainty,” said Della Schmidt, President and CEO of the Winona Area Chamber of Commerce. “That’s the number one thing is that we want to know what is the plan, and what is the timeline. Then we can begin effectively planning and preparing accordingly.”

The project is still in the planning stages. Schmidt says that most area businesses want to see something similar to the bridge system that connects La Crescent to La Crosse. 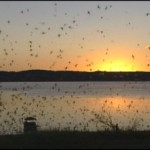 They’re a nuisance to some, but a spectacle to others.

The mayflies have attracted the attention of entomologist and television host Dr. George McGavin.

A crew for the upcoming BBC program “Swarm Chaser” arrived in Wisconsin Friday. The program will feature McGavin in the “eye of the swarm” for a variety of animal species.

“Earlier in the week we were filming bees. I was completely covered in bees,” McGavin said. “The other day I was hanging off a rope in a cave near Austin in Texas, and there were ten million bats flying around me.”

McGavin is hoping for a similar situation with a mayfly hatch. He first became interested in the insects when he saw a photo of a man shoveling them to clear a path for his car. In Wisconsin, swarms can be large enough to show up on Doppler radar. Some years, road crews have cleared the bugs from the road with snowplows.

McGavin says the recent heat wave could mean a larger hatch than the one in June. He explained why the insects swarm in such large numbers.

“Those swarms that you see are swarms of males flying around, into which females will enter and mate,” he said. “And, of course, if you do that en masse, it means A: Your chance of finding a mate is very much higher, but also, your chances of surviving to lay eggs is also very much higher. “

Mayfly hatches occur in England and Hungary, but not to the magnitude Wisconsites see. McGavin credits the Mississippi River, and says the mayflies play an integral role in the river ecosystem.

“Insects form a really essential part of the food chain for lots of fish and birds. And the fact that they have this interesting swarming behavior is in itself interesting,” he said.

McGavin is hoping you can help him track the next big mayfly swarm. If you see one developing call 608-790-7012 to report it.

“Swarm Chaser” will be out on the BBC and Discovery Channel sometime next summer. 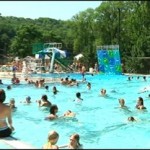 LA CRESCENT, Minnesota (WXOW) – You could say the new La Crescent city pool is making a big splash in the community.

The pool opened June 9th, and attendance is regularly between 300 and 400 people.

That’s up dramatically from last year, when the much smaller pool’s capacity was 200.

“We’ve had the perfect summer for a lot of people at the pool,” Steffes said. “It’s been warm, not much rain. We have great slides, a climbing wall, so we’ve had a very, very busy summer at the pool.”

Finance officials from the city say the revenue from the pool is up $70,000 from this time last year.

The pool closes for the summer on August 25th. It will reopen next year on June 1st.